The
CBDT or Central Board of Direct Taxes has notified a new format for Form 16. This
requires the break up of the Tax-Exempt Allowances paid to the employee and
also of all tax breaks claimed by them. In the previous format allowed the
companies to give consolidated figures or break-up in different formats for
both, thereby leaving some ambiguity regarding their individual composition.

Several changes have been
made in the format of the TDS certificate for the Assessment Year 2019-20, the
new format of Form 16 will allow the
Income Tax Department get a detailed break-up of the income and tax breaks
claimed by a salaried person at the first instance itself. Moreover, if there
is any discrepancy between the income and deductions shown in TDS certificate
and the ITR filed by the taxpayer, it will be quite easy to spot it. This new
format is likely to help the department digitize cross checking of figures too,
as it takes away the leeway that companies earlier had in providing the
break-up of income and deductions and fixes the format for providing necessary
details. 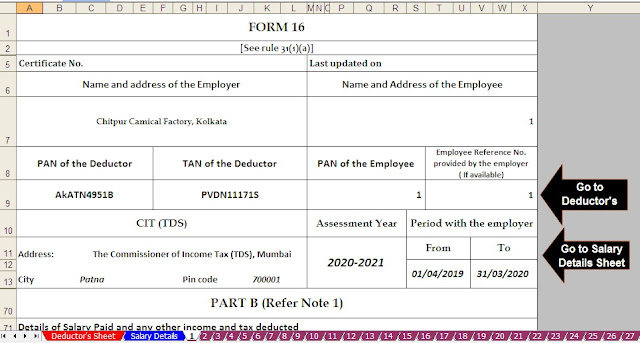 The
main feature of this Excel Utility:-

4)
Most easy to install just
like an Excel File

5)
Easy to Fill the all column

6)
Automatic Convert the Amount
to the In-Words

The
new Form 16 format was notified on 12th April
2019, by the Central Board Direct Taxes. The format mentioned in the
notification will come into effect from 12th May
2019, which is well ahead of the last date to issue the TDS certificate to the
salaried employees by Employers/ Tax Deductors. Therefore, those issuing Form
16 after this date will have to do so in the new format.

·
The nature as well as amount of
Tax-Exemption should be mentioned by Employer.

·
The Part B of form 16 has been amended to
provide the section wise break-up of various exemptions allowed under section
10 of the Income Tax Act.

·
Form-16 will also contain the break-up of
all the tax-related deductions under section 80C to 80U claimed by taxpayer
from the salary paid to him/ her by your employer.

·
If a taxpayer has received salary from his/
her ex-employer or other employer during the previous year and same has been
reported to the current employer for TDS purposes, then separate reporting is
required in case of such a salary income new Form 16.

·
Standard deduction, announced in the Budget
2018, has also been introduced in Form16 under the head ‘Deductionunder section 16’.

·
Now, income apart from salary is confined
and can only be reported under Income from